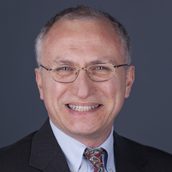 Chris Drahozal is an internationally known scholar whose writing focuses on the law and economics of dispute resolution, particularly arbitration. Drahozal is the author of multiple books and numerous articles on commercial arbitration. He has given presentations on the subject in Europe, Asia, South America, Canada and the United States, and has testified before Congress and state legislatures on arbitration matters as well. He is serving as an Associate Reporter for the ALI's Restatement of the U.S. Law of International Commercial and Investor-State Arbitration, and previously served as a Special Advisor to the Consumer Financial Protection Bureau, assisting with its study of arbitration clauses in consumer financial services contracts. Drahozal also is a well-respected teacher and received the Immel Award for Teaching Excellence in 2004. Prior to coming to KU, Professor Drahozal practiced law with Sidley & Austin in Washington, D.C., and served as a law clerk for Chief Judge Charles Clark of the United States Court of Appeals for the Fifth Circuit, Justice Byron R. White of the United States Supreme Court, and Judge George H. Aldrich of the Iran-United States Claims Tribunal in The Hague, The Netherlands.