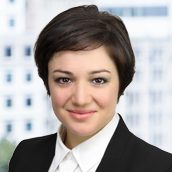 Christina Doria assists corporations and states with complex commercial litigation, and domestic and international arbitration matters. She is ranked by Who's Who Legal (“WWL”) Canada - Arbitration 2020 as a national leader, and by WWL Arbitration 2020 and 2021 as a Future Leader who has “extraordinarily strong counsel skills and an excellent command of international arbitration practice”. She is also recognized by The Legal 500 as a rising star for dispute resolution, and by the 2019 and 2020 Canadian Legal Lexpert Directory as a Leading Lawyer, Commercial Arbitration. Christina advises clients in contractual disputes and in investor-state disputes in energy, mining, infrastructure and transportation industries. She has appeared before all levels of Ontario court, the British Columbia Court of Appeal, the Manitoba Court of Queen's Bench and before domestic and international arbitral tribunals. She has acted on commercial arbitrations under UNCITRAL, AAA/ICDR, ADRIC, BCICAC, ADR Chambers and CPR rules, as well as on investor-state arbitrations under ICSID, UNCITRAL and NAFTA. Christina is an arbitrator on the Expedited Arbitration Roster for International Centre for Dispute Resolution (ICDR) Canada, and has sat as an arbitrator under the ICDR Rules. As the recipient of an international clerkship award, she began her career in Baker McKenzie's New York office before returning to Toronto. Christina contributes to the both the global and local arbitration bar: she is on the ICDR International Advisory Committee (subcommittee for ICDR Publications and Education), served as the VP of Education and Events for Young Canadian Arbitration Practitioners (YCAP) from 2018-2020, was an executive board member of the ICDR, Young and International (ICDR Y&I) from 2016-2019, and previously served a three-year term on the ICDR Y&I Global Advisory Board; she is a North American Regional Representative for the LCIA's Young International Arbitration Group (YIAG); and was a founding steering committee member of the Firm's International Arbitration Associates Forum. Committed to improving gender diversity in law, Christina sits on the Firm's Women in Arbitration steering committee. Christina holds an LL.M. in international law, and frequently writes and speaks on cross-border litigation and arbitration matters. She served on Baker McKenzie's Pro Bono Committee from 2013 to 2016.