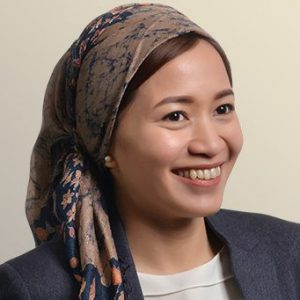 She has advised a range of clients such as members of the International Group of P&I Clubs, charterers, shipowners and shipyards on commercial matters and various charterparty and commodities trading disputes. She also enjoyed a secondment at J.P.Morgan’s Commodity Trading legal group in Singapore, where she worked on complex cross-border trades and OTC commodity derivatives transacted under the International Swaps & Derivatives Association master agreements.

Hanna has a Master of Laws in Admiralty from Tulane University Law School, where she was President of the Graduate Lawyers at Tulane, and a Bachelor of Laws from Universitas Indonesia (UI), where she received the Dean’s Award of Appreciation for Academic Excellence and Achievements.

Hanna is admitted to practice in all courts in Indonesia, and speaks English and Bahasa Indonesia.