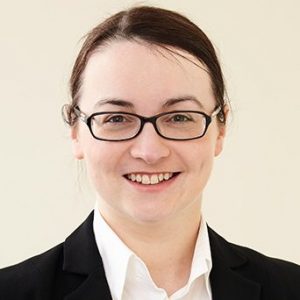 Stephanie Barrett is a lawyer at Quadrant Chambers whose practice encompasses a wide range of commercial litigation and arbitration, but is primarily focused on dry shipping (especially charterparty and bill of lading disputes), shipbuilding and offshore construction, international trade, insurance, aviation/travel and energy.  Her cases often involve technical complexity, such as unsafe port claims, dangerous cargo claims and shipbuilding contract termination claims involving large numbers of defects.  She undertakes drafting and advisory work in all areas of her practice. Stephanie also appears regularly (both as a junior and as sole counsel) in Commercial Court hearings and in commercial arbitrations on various terms including LMAA.

Given the predominance of arbitration in Stephanie’s practice, many of her cases are unreported.  In terms of reported Court cases, Stephanie recently acted as sole counsel in The Amity [2017] Bus. L.R. 2090, a case on the authority of junior employees to accept service of arbitration notices.  She also acted as junior counsel in Emma Moore v Hotelplan, t/as Inghams [2010] EWHC 276 (QB), concerning tour operator liability for excursions, Lloyds TSB Equipment Leasing (No. 1) Ltd v Revenue and Customs Commissioners [2014] STC 2770 (Court of Appeal)), concerning capital allowances on LNG tankers used in the Norwegian Snøhvit project, and Ford v Malaysia Airlines [2014] 1 Lloyd’s Rep. 301 (Court of Appeal), concerning the meaning of “accident” under Article 17 of the Montreal Convention.

Stephanie is listed as an 'Up and Coming' Junior in the Chambers & Partners 2019 Directory.